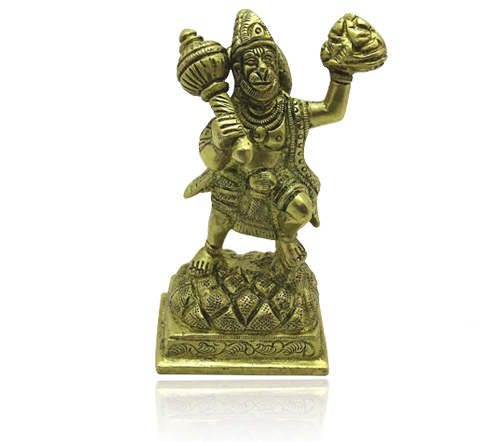 In this Idol, Lord Hanuman is carrying the Drongiri mountain. The Story behind this posture is when Lakshman is severely wounded during the battle against Ravan, Lord Hanuman is sent to fetch the Sanjivani, a powerful life restoring herb from Drongiri mountain in the Himalayas, to revive him. Ravana realises that if Lakshman dies, a distraught Rama would probably give up and so he dispatches the sorcerer Kalanemi to intercept Hanuman. Kalanemi, in the guise of a sage, deceives Hanuman, but Hanuman uncovers his plot with the help of an apsara, whom he rescues from her accursed state as a crocodile. Ravana, upon learning that Kalanemi has been slain by Hanuman, summons Surya to rise before its appointed time because the physician Sushena had said that Lakshman would perish if untreated by daybreak. Hanuman realizes the danger & becoming many times his normal size, detains the Sun God to prevent the break of day. He then resumes his search for the precious herb but when he finds himself unable to identify which herb it is, he lifts the entire mountain and delivers it to the battlefield in Lanka. Sushena then identifies and administers the herb and Lakshman is saved. Rama embraces Hanuman, declaring him as dear to him as his own brother. Hanuman releases Surya from his grip, and asks forgiveness, as the Sun was also his Guru.