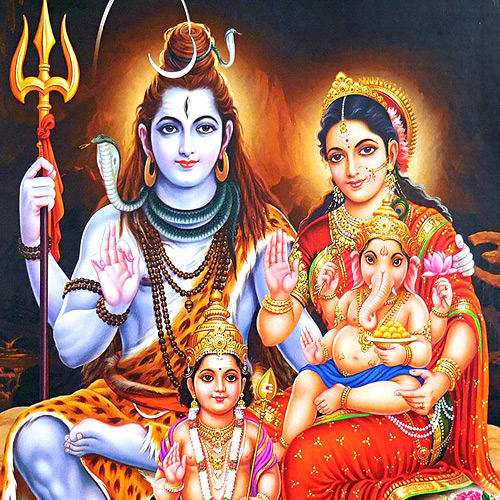 Information about Shiv Parivar Puja & Homam
As per Hindu Mythology and Ancient Vedic Texts, Lord Shiva is one of the most powerful Deity and is also known as many other names like Mahadev, Devo ke Dev, Maha Mrityunjay. Lord Shiva is supposed to be responsible for the destruction and re-creation of the Universe but in fact, worshipping to Lord Shiva leads to the Destruction of all kinds of Negative forces, Evil Energies, Miseries and Hardships of life and the worshipper is able to lead a life full of Peace & Prosperity, Health, Wealth and Happiness.
Goddess Parvati, who is the consort of Lord Shiva is the incarnation of mother nature also known as Shakti and a combination of Lord Shiva and Goddess Shakti is responsible for the creation of each and every particle of Universe. Goddess Parvati has taken various incarnations in the form of Nav Durga and Das Mahavidya and praying to Goddess Parvati brings Peace, Prosperity and Longevity of life in Family.
Lord Kartikeya is the elder Son of Lord Shiva & Goddess Parvati and he is the Leader of Celestial Army since he is the giver of Courage, Cleverness, Power of Learning, Concentration as well as enhanced Wisdom and Knowledge. Worshipping Lord Kartikeya also saves a person from worldly sorrows due to enhanced knowledge and increased energy and courage.
Lord Ganesha is the younger Son of Lord Shiva & Goddess Parvati and is also known as Vighnaharta (Remover of Obstacles). Lord Ganesha is also known as Ashtavinayaka, Ekadanta, Gajanana, Vakratunda and Ganpati. Lord Ganesha is always worshipped before starting any important work like a new Business, House construction or any other undertaking. He is the bestower of Auspiciousness, Success, Intelligence, Education, Knowledge, Wisdom as well as Wealth & Prosperity.

By worshipping Shiva Parivar, one can have Peace, Prosperity and Unity in the family. Since worshipping Lord Shiva Pariwar gives blessings of all the four deities ( Lord Shiva, Goddess Parvati, Lord Kartikeya & Lord Ganesha ) together.

If you opt for a VCD recording then you will get a Recorded VCD of around 45 minutes which will cover the most important parts of the Puja.

The exact Date and Timings of Shiva Parivar Puja will be informed to you through an email and your representatives are most welcome to attend the same.

Prasadam of Shiva Pariwar Pooja will be sent via Courier. This Prasadam includes the below listed items that have been energized during the puja and they are supposed to carry the blessings of the puja to the client :

Please provide these information in the fields provided above along with the main image. Alternately you have an option of mailing us this information through email along with your Photo (if you wish) at the mail ID given below after you have placed your order.

All the pujas will be performed at Ahmedabad, India and the venue will be finalized by our purohits depending upon the type of Puja. The date is normally within 3 days of the receipt of the order unless it calls for a particular date either due to the customer’s choice or due to the type of Puja which requires to be performed on some specific Tithi (date according to the Hindu calendar) as per Vedic Shastras.