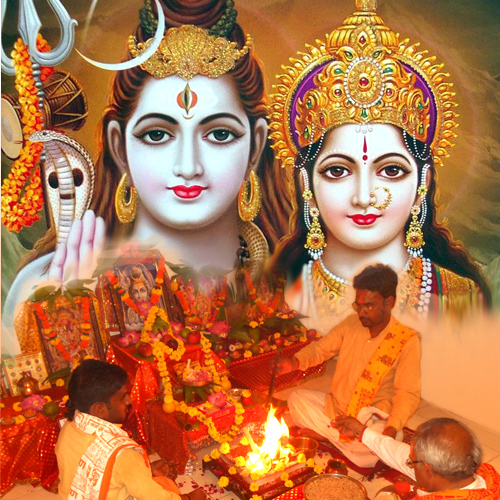 Information about Shiv Shakti Puja & Homam
Lord Shiva is one of the most powerful Deity as per Hindu Mythology & Ancient Vedic Texts and is also known as many other names like Mahadev, Devo ke Dev, Maha Mrityunjay. Lord Shiv is supposed to be responsible for the destruction and re-creation of the Universe but in fact, worshipping to Lord Shiva leads to the Destruction of all kinds of Negative forces, Evil Energies, Miseries & Hardships of life and the worshiper is able to lead a life full of Peace, Prosperity, Health, Wealth and Happiness.
Goddess Parvati, who is consort of Lord Shiva is the incarnation of mother nature also known as Shakti. A combination of Lord Shiva and Goddess Shakti is responsible for the creation of each and every particle of Universe. Goddess Parvati has taken various incarnations in the form of Nav Durga & Das Mahavidya and praying to Goddess Parvati brings Peace, Prosperity and Longevity of life in Family.
By worshipping Shiv Shakti, a person gets combined blessings of Lord Shiva and Goddess Parvati ( Shakti ) which bestows all round Peace, Prosperity & Happiness, Protection from all kinds of miseries and negative forces as well as attainment of high levels of spiritual consciousness even while involved in worldly affairs.
Shiva Shakti Puja is also very effective in bringing harmony, deep love and affection between Husband & Wife.
Puja Procedure

The exact Date and Timings of Online Shiva Shakti Puja will be informed to you through an email and your representatives are most welcome to attend the same.

Items in the Prasadam

If you opt for the Prasadam, then the Prasadam of Shiva Shakti Pooja will be sent to You via Courier. This Prasadam includes the below listed items that have been Energized during the puja :

To view and know more about the Individual item of Puja Prasadam, Click Here
Details required for Puja
We request you to provide us the following details for the Puja in the fields provided above along with the main image :