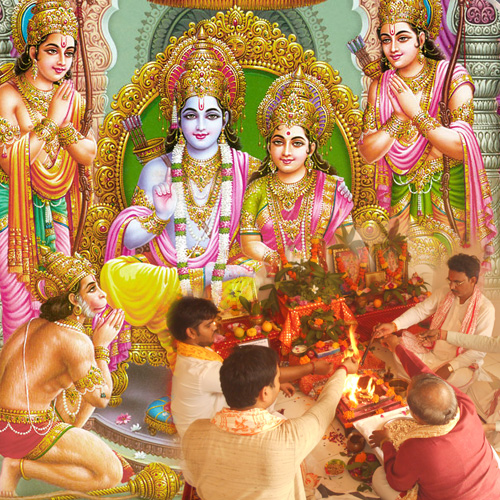 Information about Ram Darbar Puja
A Ram Darbar depicts Lord Rama, his consort Devi Maa Sita, his brother Lakshman and his ardent devotee Lord Hanuman all together, with Lord Rama in the center, Devi Maa Sita on one side, Lord Lakshman on the other side and Lord Hanuman sitting infront of them with folded hands.
Lord Rama is the most revered incarnation of Lord Vishnu. He is also known as Maryada Purshottam which means he was the best among all the people and he never crossed his limits to set an example to the other people of world inspite of having all powers since he was incarnation of Almighty God.

This Prayer also works as a shield to protect the worshipper from all kinds of troubles, diseases, enemies, dangers and obstacles thereby paving a path to glorious Success, all round Prosperity, Fame and Luxuries.

We will inform you the exact Date & Timings of Ram Darbar Puja & Yagna via Email and your representatives are welcome to attend the same.

One who removes all dangers and is the giver of all wealth
By looking at whom, the world feel pleased, to that Shri Rama, I bow again and again

I bow down to one whom I know as Ram, Rambhadra, Ramchandra, Raghunaath, Naath( My over Lord) and consort of Devi Maa Sita

One whose body has the colour of a blue lotus and whose body parts are delicate, on whose left side resides Maa Sita and who has a most powerful arrow and a beautiful bow in His hands, I pray to that Lord Shri Rama who is the Lord of Raghu dynasty

To view and know more about the Individual item of Puja Prasadam, Click Here
Details required for Puja
We request you to provide us the following details for the Puja in the fields provided above along with the main image :
Alternately you have an option of mailing us this information through email along with your Photo (if you wish) at the mail ID given below after you have placed your order.
Email us
info@divine-rudraksha.com
Call us
Landline : +91 79-40032280
Mobile : +91 989816 9911
Puja Ethics

All the pujas will be performed at Ahmedabad, India and the venue will be finalized by our purohits depending upon the type of Puja. The date is normally within 3 days of the receipt of the order unless it calls for a particular date either due to the customer’s choice or due to the type of Puja which requires to be performed on some specific Tithi (date according to the Hindu calendar) as per Vedic Shastras.