Navratri is celebrated all over India and is said to be the festival which shows the various colors of India. "NavRatri" literally means "Nine Nights." This Year Navratri will be celebrated from Monday, 26th September 2022 till Tuesday, 4th October 2022. The festival of Navratri is celebrated with prayers in the beginning of the Ashwin (autumn) month and the beginning of Chaitra (spring) month. Navratri, the festival of nine nights is dedicated to the nine forms of Goddess Durga who occupies a special place in the Hindu Religion. During the nine days of Ashwin (autumn) Navratri (also known as Shardiya Navratri), a large number of Devotees observe fast for the entire period. During evenings people perform religious dances in order to worship Goddess Durga Maa.

According to Hindu mythology, Goddess Durga is the mother of mankind and is believed to be the power behind the creation, preservation, and destruction of the universe. The Hindu warrior Goddess Durga is typically portrayed as a beautiful woman with ten arms that bear divine weapons to protect each one of us. Her role in Indian mythology is very strong and powerful. She has been worshipped as the supreme power of the universe. She is a multi-dimensional Goddess, with many names and many persons. 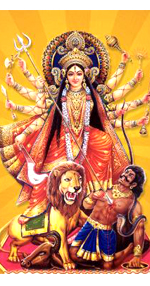 History behind Birth of Goddess Durga : There is an interesting legend behind the birth of Maa Durga. According to this legend, Durga was created for the slaughter of the buffalo demon Mahishasura. Mahishasura is a demon who earned the favour of Lord Shiva after long and hard penance. Authorized with the boon, Mahishasura started his reign of terror over the universe and people by slaying them mercilessly. The other Gods and sages were extremely harassed by the terror of Mahishasura and pleaded Lord Shiva to protect their world from this buffalo demon. Lord Shiva advised all the Gods to release their divine powers as it was seemed that the joint energy of powers was the only thing capable of conquering Mahishasura. The divine powers of all the Gods emerged into female form. These powers fused together in shining light from which arose a magnificent Goddess with many arms. She was born fully-grown and is depicted as remarkably beautiful and full of rage. The Gods named this Goddess as DURGA. Gods armed her with all their weapons. Thus heavily armed Maa Durga rode to the top of amountain on a lion. In a fierce battle, she defeated Mahishasura and his army of demons and thus saved the Universe from this demon’s threat. Therefore, MAA DURGA is also called Mahishasuramardini (the demolisher of Mahishasur). This holy battle indicates the triumph of Good over Evil. DURGA PUJA is observed in honour of Godess Durga , to celebrate her victory over evil and conquering the unconquerable.

Goddess Nav Durga in Nine Forms :
Nine forms of Shakti are worshipped during the Navratris. Every day, she assumes a new incarnation, having a new look and name. Each Goddess has a different form and special significance.

The message that Goddess Durga gives to her devotees is that with the force of dignity and wisdom, we can achieve the victory over all the demonic forces inside us.

1st Day of Navratri ( Monday, 26th September 2022 ), Pratipada Tithi : On the first day of Navratri, Goddess Durga is worshipped as 'Shailputri' She is considered the daughter of the Himalayas. This form of Goddess Durga rides a bull and carries a trident and a lotus in her two hands.

3rd day of Navratri ( Wednesday, 28th September 2022 ), Tritiya Tithi : On the third day of Navratri the Goddess is worshipped as 'Chandraghanta'. She is the symbolic representation of beauty and bravery. She has a ‘chandra’ or half moon on her forehead in the shape of a ‘ghanta’ or bell. That is why she is called ‘Chandraghanta’. She is charming and has ten hands, three eyes and holds weapons in her hands.

4th day of Navratri (Thursday, 29th September 2022 ), Chaturthi Tithi : On the fourth day of Navratri, the Goddess is worshipped as 'Kushmanda'. It is believed that Devi Kushmanda is the creator of the entire Universe which she has created by her smile. The universe was full of darkness, until her light spreads in all directions like rays from the sun. She has eight hands, and holds weapons, glitter, rosary, etc., in her hands.

5th day of Navratri ( Friday, 30th September 2022 ), Panchami Tithi : On the fourth day of Navratri, Goddess is worshipped as 'Skand Mata'. She is actually called so because she is the Mother of Skanda, the chief warrior of the Gods army. She is accompanied by the Lord Skanda in his infant form. Skanda Mata has four arms and three eyes, holds the infant Skanda in her right upper arm and a lotus in her right hand which is slightly raised upwards. The left arm is in pose to grant boons with grace and she holds a lotus in left lower hand which is also raised.

6th day of Navratri ( Saturday, 1st October 2022 ), Shashti Tithi : On the fifth day, the Goddess is worshipped as 'Katyayani'. Goddess Katyayani rides on a magnificent Lion and she has four hands. She carries lotus flower and sword in her right hands and keeps her left hands in Abhaya and Varada Mudras.

7th day of Navratri ( Sunday, 2nd October 2022 ), Saptami Tithi : On the sixth day, the Goddess is worshipped as 'Kalratri'. Her complexion is dark black and she rides on a donkey. She is depicted with four hands. Her right hands are in Abhaya and Varada Mudra and she carries sword and the deadly iron hook in her left hands.

8th day of Navratri ( Monday, 3rd October 2022 ), Ashtami Tithi : On the seventh day, the Goddess is worshipped as 'Maha Gauri'. She is considered to be extremely beautiful, white like snow and she wears white colored ornaments. She represents calmness and exhibits Wisdom. Her power is unfailing and praying to her is instantly fruitful. The left upper hand holds a ‘Damaru’ and the lower one is in the pose of granting boons to her devotees.

9th day of Navratri ( Tuesday, 4th October 2022 ), Navami Tithi : On the eighth day, the Goddess is worshipped as 'Siddhidatri'. It is believed she is bestower of all the eight Siddhis. She lives on lotus and has Supernatural healing powers. In ‘Devi Bhagvata Purana’ it is mentioned that Lord Shiva worshipped her and was blessed with all Siddhis (supernatural powers). By her blessings his half body became female and other half body male in the avatar of Ardhnarishwar.

Garba is a form of dance that has originated in the state of Gujarat in India. Traditionally, this dance is performed around a clay lantern with a light inside, called a Garbha Deep and the name Garba has been given due to this reason. However, Nowadays the Garba dances are performed with a lot of enthusiasm and vanity. Huge Pandals are erected along with a big stage where professional musicians and singers perform Garba tunes. Thousands of people of every age dance on these tunes for the entire night. Many people are dressed in special attire known as Garba dress. At some venues even the prizes are given to good performers at the end of every night.