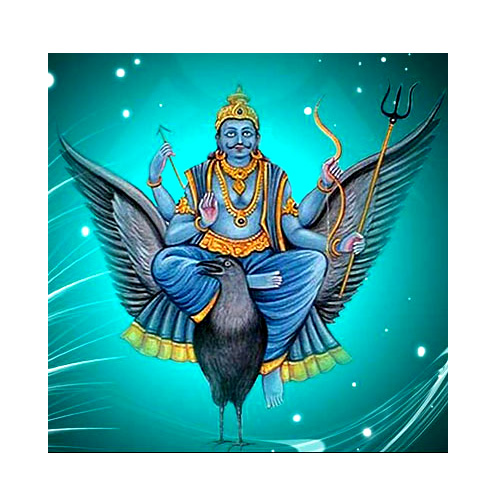 First Phase : During this period the planet Saturn is transiting over the 12th house from Natal Chart Moon. As such it is said to be affecting the Head region of the Native thereby giving problems related to this region of body.

Third Phase : This is the period when the Saturn is transiting over the 2nd House from Moon. This is the last phase of Saturn Sade Sati and Saturn is said to be affecting the lower body region during this transit.
Apart from this when the Saturn is transiting over the 4th and the 8th house of your Moon Chart, this period is known as DHAIYA or the SMALL PANOTI of the Saturn.
The effect of Sade-Sati remains for seven & a half year and that of Dhaiya remains for two and a half year. These transits of planet Saturn generally adversly affects health, mental peace & finances of the native.

Normally people are very afraid of Saturn Sade Sati and Dhaiya since planet Saturn is considered to be a Cruel Planet giving inauspicious results. However this is not always true and in fact sometimes the Saturn Sade Sati may prove very beneficial to a native depending upon the position of Saturn in his/her horoscope.
CLICK HERE to read about Our Astrologer Shri Ramesh K Khaitan
On our special request, our astrologer Mr. Ramesh K Khaitan has agreed to provide a reasonably comprehensive Horoscope Analysis for Saturn Sade Sati at most reasonable charges. Simultaneously we will also provide the facility for you to book the Pujas recommended for you ONLINE through our website. These Pujas will be performed by most competent Brahmins ( Pundits ) under the Personal Supervision and Guidance of our Expert Astrologer Mr. Ramesh Khaitan.
Our HOROSCOPE ANALYSIS REPORT FOR SATURN SADE SATI will have THREE components as follows :
A) COMPUTER GENERATED HOROSCOPE PROVIDING THE FOLLOWING INFORMATION
1. Birth Details
2. Birth Panchang
3. Lagna Chart, Navamsa Chart, Moon Chart, Chalit Chart
4. Saturn Sade Sati and Small Panoti Report
5. Favourable Points of your horoscope like Lucky & Friendly numbers, Favourable Days & Years, Favourable & Unfavourable Planets, Favourable
Gems, Colours etc.
6. 16 Sub Charts covering various areas of life
7. Planetary Relations Chart
8. Vishonttari Dasha and Antar Dashas
9. Yearly prediction based on the planetary Dasha/ Antardashas/pratyantardasha
B) PERSONAL ANALYSIS BY OUR ASTROLOGER REGARDING THE FOLLOWING AREAS OF YOUR HOROSCOPE
1. Your Ascendant Sign and position of its Lord
2. Your Moon Sign and position of Moon
3. Good Yogas/ Raj Yogas of your Horoscope
4. Bad Yogas of your Horoscope
5. Yog Karak Planets of your Horoscope
6. Exalted, Debilitated and Combust planets of your horoscope
7. Personal observation regarding Sade Sati and position of Saturn in your Horoscope
8. Mangalik Dosh Analysis ( if present ) and position of Mars
9. Personal comments over the state of Saturn in your horoscope ( whether Benefic or Malefic )
C ) REMEDIAL MEASURES BY OUR ASTROLOGER BASED ON HIS PERSONAL ANALYSIS OF YOUR HOROSCOPE
1. Remedial Recommendations to minimize the adverse effects of Saturn Sade Sati
2. Puja Recommendations as per doshas and bad yogas of your Horoscope
3. Rudraksha Recommendations as per your Horoscope
4. Mantra Recommendations
5. Recommendations for Donations as per your Horoscope
6. Recommendations for Yantras
7. General Recommendations

Please provide the following information about you (which is necessary for preparing a horoscope) at the time of Checkout while booking for a Horoscope Analysis :