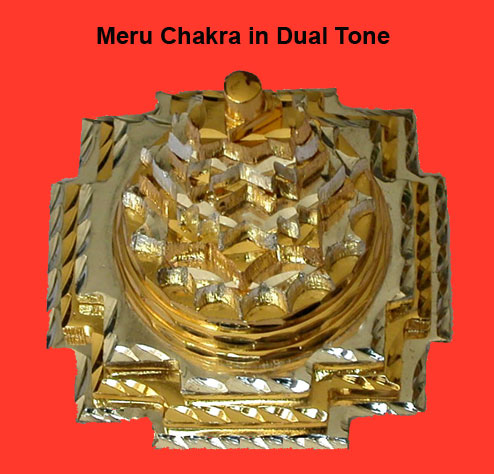 SHREE MERU MAHA YANTRA - The absolute tool for overall Peace, Prosperity & Happiness
Shree Meru Maha Yantra also named as Shree Meru Chakra and it is the ultimate tool to get Peace, Prosperity, Health, Wealth and Happiness. It can be installed at various places like Home, Office, Business centre, Temples and other places of worship. It disperses very good and favourable energy which also have a healing power to it and hence this Yantra can also be installed at places like Hospitals, Healing Centers, Prayer Halls or even at places of Religious or social ceremonies.
Literally, Shree Maha Meru Yantra is a three dimensional projection of yantra known as Shree Yantra which is said to be mother of all yantras. It is considered that this yantra has been created by “Trinity” themselves who are the creator of this universe as well. Hence, this Yantra is also believed to be a genetic code of the entire cosmos. Ancient Vedic Texts guarantee that even a mere presence of this Yantra in a household or at any other place bestows Success, Happiness, Mental Peace as well as Health, Wealth and Harmony. This Yantra is said to rectify all kind of Doshas including the Vastu Dosha. When this Yantra is placed in the North East, it modifies and corrects the energy levels of North East as well as energy levels of entire house which makes it an extremely effective device of Vedic Yantra science since the defects in the North East and North are assumed to be most harmful.
In a two dimensional form of Shree Yantra, triangles are positioned in five levels around the center. However, in Shree Meru Chakra, the same levels are positioned at different heights with the center being the peak point making it a three dimensional structure which makes it highly more potent than its two dimensional form. The Shree Meru Maha Chakra have such a powerful positive aura that it actually creates auspicious space around itself and hence even if it is merely kept in any household, it brings Peace, Prosperity, Health, Wealth and Happiness by its own powers. Not only this, it wards off and neutralizes all kind of negative fields and energies, protects from evil eye as well as the malefic effects of adverse transits of planets. Hence, every Household / Business premises should have at least one Shree Meru Maha Yantra installed and worshipped there.
This Yantra bestows the worshipper with Peace, Prosperity, Happiness, Name & Fame, Power, Authority, Wealth and Success and is said to be most powerful Yantra in this era which is Kalyug. This Yantra has been worshipped by people from different levels of society including Kings, Princes, Businessman, Scholars, Researchers and Leaders to get Success, Name, Fame, Power and Authority. This Yantra can be worshipped by all the people without any discrimination of religion, beliefs, cast and gender to get Success, Peace, Prosperity, Health, Wealth and Happiness. It is also strikingly good if this Yantra is gifted to someone or at special occasions like wedding, house warming or start of a new business since it is a very auspicious yantra.
Golden & Silver Plated Shree Meru Maha Yantra

This Yantra is metallic and is made of pure Brass with alternate layers of Golden & Silver plating. The available sizes are 3x3 inches and 4x4 inches. You may select the size of your choice by clicking on the Dropdown option provided along with the main image.

The following items will be complimentary in the Shree Meru Maha Yantra 3x3 inches and 4x4 inches size :
Beej Mantra

Presiding Deity
Goddess Maha Lakshmi
Day to Install
Friday
Direction for placing this Yantra
North East
Energization of Shree Maha Meru Yantra
Please note that as such, the Yantra sent to our clients are already energized by our Guruji according to rituals required as per ancient vedic texts and hence it can be directly placed in the Puja Room or place of worship.
However, if the client wishes then additionally He / She may do the following :
On Friday morning, after having bath, wash the Yantra with clean water and wipe it clean with a soft piece of cloth then install it with full faith at your worshipping place. Light a lamp and kindle some incense sticks. Offer Yellow / Red flowers and then chant the Beej Mantra of this Yantra on a Rosary of Lotus Beads ( Kamal Gatta ).
Please Note
The Design of the yantra may vary slightly from the image shown above, as we keep on upgrading our yantras under the guidance of our learned gurus to make yantras more and more potent.